Thanks to everyone who stopped by to chat with Jennifer Linforth while she was here at the Tiki Hut. Congrats goes out to JoanneR - you are our winner, please send your mailing address to AuthorIsland at yahoo.com so Jennifer can get your prize out to you!
Posted by AuthorIsland.com at 12:56 PM No comments:

Email ThisBlogThis!Share to TwitterShare to FacebookShare to Pinterest
Labels: Abendlied, Jennifer Linforth, Madrigal, The Phantom of the Opera

This Week At The Tiki Hut - Jennifer Linforth

This week at the Tiki Hut is author Jennifer Linforth who talks about why she tackled Leroux's Phantom of the Opera in her historical series published by Highland Press. 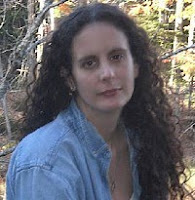 If one is going to query a publisher, Jennifer Linforth suggests not doing so in pink ink. Her first, written when she was twelve, was nothing if not colorful. She is a member of the Historical Novel Society and the Romance Writers of America in addition to being a writing mentor. Writing historical fiction and historical romance with unusual themes and locations, such as autism and the social mores of the mentally ill in the 19th century, she has a passion for Austrian culture and is often found searching for stories in long forgotten histories.

It was her love of research and classic literature that brought her to expanding Leroux's The Phantom of the Opera.

Writing from a tiny loft office, Jennifer admits to being country mouse with city mouse tastes and is constantly fighting to keep the little critters in line. She can't pronounce pistachio, hates lollipops with gooey centers, and dearly loves to laugh. If asked for her motto in life, she points to the following poem upon her office wall:

Everyone wants to undress Mr. Darcy in one way or another. Whether literally, or by expanding his story, readers yearn to dive deeper between his sheets. So why then did I choose to do so to a Phantom?

The Phantom of the Opera has one of the largest and most devoted fan followings in the world. Choosing to expand such a classic came with an impending sense of doom. Would this idea be embraced like the countless tales of Pemberly after the nuptials? Or would I be tarred and feathered…

I had to find out. The result was a three book series contracted by Highland Press Publishing, and one which has, thus far, left this author thankfully featherless.

Certain stories transcend time leaving more questions than answers. No author made me question as much as Gaston Leroux. My love for The Phantom of the Opera stemmed from a deep respect for a book that was a mystery, horror and romance rolled into one. After revisiting Leroux’s novel for the third time the questions in my head would not fade. Why—as a jurist—did he leave so many unanswered questions in such a fascinating book?

The only way to find out was to devote years of my imagination to living deep below an opera house with a corpse-like madman. 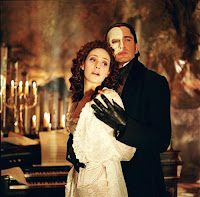 The first challenge? Breaking down the visions created by Andrew Lloyd Webber. His musical and 2004 movie starring Gerald Butler created an iconic image of The Phantom and the story as a whole. Leroux’s original is quite different from the romantic, famous love triangle of Webber’s that millions of fans saw and fell in love with. In Webber’s film and musical we see a mildly deformed man clearly oozing sex appeal who happens to have murdered out of anger. Webber stripped away the unattainable parts of Leroux’s story to leave a basic romance as the focus. In Leroux, Erik (The Phantom), was a murderously vengeful personality… a clear madman, while concurrently being a repressed and ardent gentleman. He was the central character in a Death and the Maiden tale. Hideously deformed and hiding behind a full black mask, he slept in a coffin. He had issues with maternal longings just as Christine had issues with paternal needs. Leroux penned him as a monster for a reason. I did my best to adhere to his original ideas for my series while maintaining there was indeed a man with in the madman. Naturally, certain elements were changed to suit the limits of my imagination and to reach the broader market desired by my publisher.

The second challenge? Weaving enough of Leroux’s original story into the fabric of the series so readers could enjoy it without needing to read Leroux’s book first. Book one in my series, MADRIGAL, (released October 2008) begins four years after Leroux’s original ended.

Despite all of the above, Erik was a simply seeking the most basic of human emotions--love. Yet how can one when love society sees you as nothing more than a deviant of the underground?

You fake your death and start anew…

Sharing the back cover blurb for MADRIGAL:
Years ago he faked his death and vowed the Phantom would never again haunt the Opera Garnier. But strange packages left by Anna, an unwanted Samaritan turned unlikely friend, causes Erik to desire the unattainable—love.

When Anna’s haunted past puts Christine Daaé in danger, Erik is falsely accused of the vicious crime. The Phantom is reborn as Erik, forced to the brink of insanity, revisits his passion for Christine—the woman he once swore to possess. Fighting the injustice against Erik, Anna struggles to prove his innocence. Standing in the way is her past that cannot be transcended, and years of prejudice labeling Erik more monster than man.

Battling the nobleman determined to lock him away, Erik must save Christine, control his demons, and tame a heart unexpectedly beating for two opposite women. Christine, who he longs to love, and Anna: the woman who saw beyond his bitter soul to the man beneath the mask.

In the midst of a brutal manhunt, can he be loved for himself or is he condemned to be The Phantom of the Opera?

ABENDLIED, book two of The Madrigals released January 2010 and continues to expose more of Erik and the manhunt to bring him to justice. ABENDLIED can be read prior to MADRIGAL even though it continues the first book. It follows all characters as they endure the manhunt and introduces an often forgotten part of Leroux’s plot:

Desiring normalcy is difficult enough with a price on his head, but when Erik is falsely accused of killing Philippe de Chagny, brother of his nemesis Raoul, he is launched toward madness.

Anna is an unlikely companion, sharing Erik's heart and the bounty on his head. As the manhunt heats, Erik's mysterious relationship with Philippe spurs the campaign against them forward, and exposes her darkest secret: defending her honor ended in murder.

Plagued by his past as The Phantom of the Opera, Erik's memories enslave his heart to Raoul’s wife Christine, whose shocking confession brings a ruthless bounty hunter into the fray and blackmail to the Chagny bloodline. Blackmail from a hunter who cares little about the Phantom or Philippe, and everything about the one he has lusted for: Anna.

With the past weeping like an open wound, can love endure or will it take memories of one unlikely man to heal them all?

Philippe de Chagny was a vital secondary character in Leroux’s original story and my favorite of all classic literature. It was his story that sparked the creation of this series. A series I hope readers will continue to embrace long after I put down my quill. For those who are more adventurous, once I am done writing stories that expand classic literature I can loan them some feathers… I leave it to them to find the tar!

WIN - Leave Jennifer a comment or question this week at the Tiki Hut and your name goes in the hat for an autographed copy of her novel, MADRIGAL. Be sure to leave your email address, so we can contact you if your are this week's winner!
Posted by AuthorIsland.com at 7:00 AM 9 comments: